Stock Dilution is defined as decrease in the percentage of the ownership held by the existing shareholders of the company because of the new shares issued by the company and such a dilution can happen either by offering shares in exchange of funds or can also be due to conversion of dilutive securities like stock options, convertible debt etc.

What is Stock Dilution?

Stock dilution is a corporate action that decreases the ownership of the existing stockholders of a company by means of issuing new stocks in the market. The new stock increases the total outstanding shares in the market, which results in dilution of the ownership of the existing shareholders. An increase in the outstanding shares can be a result of a primary or secondary market offering, which includes an Initial Public Offering, issuance/conversion of convertible bonds, warrants into stock, and issuance of preferred stock, new stock options, etc.

In the examples below, the three primary sources of stock dilution have been explained

‘Mber Inc’ is a design and engineering startup and has a new coffee mug that customizes the drinking temperature of coffee or tea. Year ending 2018, Mber had a common stock outstanding of 100,000 shares with a market capitalization of $1 million and $100 of net profits. Merry Andrew is an individual investor who bought 10,000 shares of Mber on 31st Dec 2018. When the company announced its earnings, Merry was merrier to know that his investment has earned $10 of Mber’s profits. 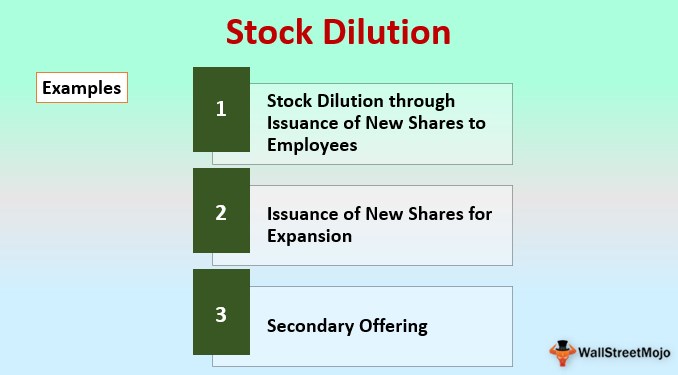 #1 – Stock Dilution through Issuance of New Shares to Employees

#2 – Issuance of New Shares for Expansion

Let’s assume Mber wants to expand its business, but the temperature control mug is yet to be a hit among the masses. That is a problem! The management thinks the solution to this problem is to buy out its rival, Vecup. Since Mber hasn’t sold any of the mugs and has no money to make a move; it would exchange its own shares to Vecup shareholders. Confused?

Breaking it down – Mber will take ownership of Vecup in exchange for new shares issued in the market. Vecup being a massive player in the market has a market capitalization of $20 billion, and Mber having a market value of $10 per share will need to make an issuance of 2 billion new shares to crack this deal. This will dilute the ownership of its existing shareholders, including Merry, by 200,000 times. Looking at the larger picture, Merry’s cut from the profit after the merger of Member and Vecup looks much smaller than his cut from the profit of Member alone. But the net profit would be much bigger. Merry would receive a small share from a bigger profit of Member and Vecup in exchange for his original investment of a big share from a small profit. Simply put, it is a smaller piece out of a bigger cake.

Stock Dilution can also be done by secondary issuance. Earlier, when Mber issues 100,000 shares to its CEO, the shareholders are impacted negatively since it is offered at a nominal price. Before the management issues the new shares to the CEO, Member starts to make it a hit among the masses with the cutting edge technology and the state of the art service to its customers. Mber’s shares a burgeon and sell the additional 100,000 shares at $500 per share. If the share price has increased without any change in its intrinsic value, Merry will be merrier than ever.

Mbers worth increased not just because of the mass popularity, the intrinsic value of the company increased as it traded $50 million for the 100,000 additional shares that were issued in the market. Merry’s 5% stake, i.e., 10,000 shares out of 200,000 shares, now have a whopping $2.5 million value.

This has been a guide to what is Stock Dilution and its definition. Here we discuss the three primary sources of stock dilution along with examples, advantages, and disadvantages. You can learn more about accounting from the following articles –