Bank reconciliation is done by customers of the bank, totally their records along with their respective bank’s statements. As the bank provides its statement periodically (generally monthly, but sometimes more frequently if requested upon charge), there may be some differences in customer’s books of accounts and those of the bank, which generates the need of reconciliation. 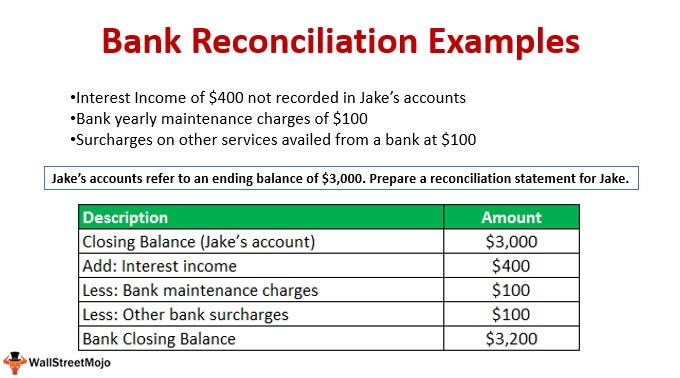 The following are the top examples of the Bank Reconciliation statement.

ABC Corp holds an account with Citizen’s Bank. On December 31st, 2016, the bank closes its records for ABC Corp, having an ending balance of $180,000 while the company closes with $170,000. The company wishes to analyze the difference of $10,000 when they receive the bank’s statement in the next month.

Below is the company’s income/expenses (at a broader level) for December 2016:

Below is the record in Bank’s statements:

Hence it is determined that the provisions made for salaries to be paid and accounts receivables cannot be reflected by the bank statements as these are transactions yet to be made.

Neeta made a payment of $2,000 for the office rent on March 31st, which was recorded in her book of accounts in the same month. However, as the nature of payment was such that the actual settlement was made in the next month, the bank could not record that transaction. Hence it was showing a break in reconciliation.

Jane made the following transactions in June from her savings bank account:

After careful reconciliation was made between the two statements (Jane’s and that of the bank), it was found that $50.00 was charged to Jane as fees by the bank. Upon further investigation, Jane realized that she had ordered a checkbook and a new Debit Card for her account during June, for which the bank has charged her $50.00.

Thus, bank fees can be a major factor that may cause a break between the customer’s and the bank’s books of accounts.

John purchases a long-term note from Bank A, which pays semi-annual interest at 4% at the end of every June and December. John closed his book of accounts in June with Ending Balance being $35,000. However, when John received his bank statement, it reflected a closing balance of $35,500. Can you guess what can be the reason for such a difference?

The difference is clearly due to interest accrued on the note purchased by John. As the interest paid is semi-annual, which is paid out at the end of June and December, the monthly statement for June included this accrued interest. The amount would be calculated based on the Principal on the note.

On July 31st, 2018, Mr. Alex George closed his books of saving accounts with an ending balance of $4,500, which was estimated in his bank account as well. When he received the bank statement, to his surprise, he was charged $50.00, and his closing balance was $4,450.

Mr. Alex approached his bank, and he was guided by the fact that his account had non-sufficient funds for July. After further analysis, he found out that the requirements for minimum balance in the account had changed during this month, raising it to $5,000. Due to insufficient balance in his account, Mr. Alex was charged $50.00 as a penalty.

Jake received his bank statement, which has the following differences from his accounts:

Jake’s accounts refer to an ending balance of $3,000. Prepare a reconciliation statement for Jake.

A reconciliation statement would include the below:

A break in bank reconciliation statement may be positive or negative, thus affecting higher or lower ending balance in bank records. Although there may be various factors which may cause breaks between the bank’s statement and personal records, bank statement still forms the basis of a lot of other analysis like valid KYC documents,  calculation of credit scores, company analysis, etc. Bank statements are verified by authorized professionals while personal records may or may not be accurate, and are sometimes adulterated to show other benefits as well.

While we discuss the authenticity of bank statements, it should always be kept in mind that these financial figures are a major part of the economy once they start flowing in public sectors. Banks use these numbers in their reporting purposes as well, hence the bank statements are considered as valid documents for the customer’s financial analysis rather than a statement(s) received from other non-professional and unauthorized customer’s sources.