Write down refers to the reduction in the book value of assets when its carrying value (purchase price – accumulated depreciation) exceeds fair value and the impaired asset and its reduced value are reflected into the balance sheet. In addition, the impaired amount is shown as a separate item in the income statement as an impairment charge or an impairment loss.

How does Write Down Work?

Generally, when an asset is purchased, it is shown at an acquisition cost on the balance sheet, and each year, depreciation is subtracted from that value. An asset is tested to know whether the fair value exceeds or is less than the carrying value. This impairment test is done by considering the future identifiable cash flows from that asset. If the carrying value of that asset exceeds undiscounted cash flows from that asset, then the asset is impaired, and value is written down to fair value.

The amount by which carrying value exceeded fair value is shown as impairment charges in the income statement, which also affects balance sheet through reserves and surplus. 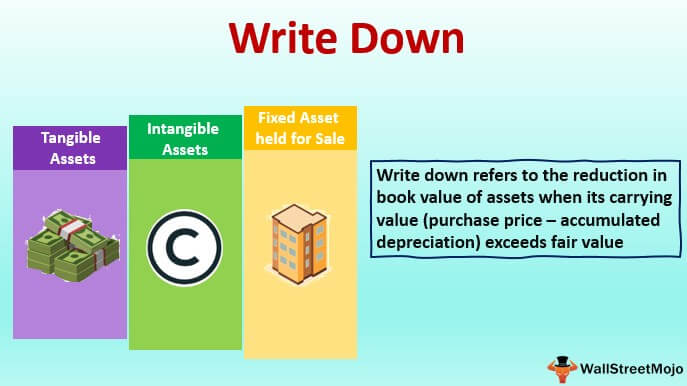 Types of Asset and their Impairment Test

Tangible assets that are likely to be impaired include property plant & equipment, inventory, and accounts receivable. PP&E may be impaired due to fall in value because of the introduction of new machinery/equipment, or it is damaged beyond repair. In case of inventory, several businesses which deal in perishable goods need to write down their inventory value with time. The technology company like Apple has to write down the value of older models with the introduction of new ones.

Intangible assets are assets that lack physical substance like a trademark, copyright, patent, goodwill, etc. Impairment may occur due to a significant decrease in market price or adverse change in legal and economic factors. For intangible assets with indefinite lives, the impairment test is done at least annually.

An asset is reclassified as an asset held for sale when it is no longer to be used, and the company’s goal is to sell it. Like if a machine ceases to be used and the company intends to sell it, then the machine is reclassified from property plant & equipment to asset held for sale. Assets previously held for use are tested for impairment when reclassification occurs, and if the carrying amount exceeds fair value less cost to sell, then an impairment charge is made.

A real-life example of write-downs is the 2008 subprime crisis. That time many of the real assets on the books of the investment banks fell below the carrying value. The fall was such that many assets fell around 80% in value, due to the nonpayment of mortgage loans and fall in demand for assets. As a result, the equity value of many investment banks went negative, and some became bankrupt.

Similarly, write up is another accounting treatment where reversal of impairment is made. After an asset is impaired, the asset’s fair value may increase. Like if a property is in dispute, it will sell for less. But if the dispute is resolved, its value would rise and may gain more than impairment loss.

The reduced asset value will lead to less depreciation, which will lead to a rise in net profit for future periods.

Write down vs. Write offs

Write down recognizes the fall in the value of an asset when the market value falls below book value. In contrast, writing off means completely removing an asset from the books due to no recoverable amount from that particular asset. Like if an investment is made in bonds of a company and that company goes bankrupt, the return on investment becomes highly unlikely. Therefore it’s written off from the balance sheet of the company.

Write down enables the investors to see the real value of the assets rather than book value and help make them informed decisions. But it is also often used as a manipulating tool by the companies to lower their earnings for a tax benefit or future benefits.

This article has been a guide to Write Down, and it’s meaning. Here we discuss how does write down works, its types, and their impairment test, along with its effect and differences from write-offs. You can learn more about from the following articles –