A box plot in excel is a pictorial representation or a chart that is used to represent the distribution of numbers in a dataset. It indicates how the values in the dataset are spread out. In a boxplot, the numerical data is shown using five numbers as a summary: Minimum, Maximum, First Quartile, Second Quartile (Median), Third Quartile.

The box of the boxplot shows first to the third quartile with a line at the second quartile i.e., median. The whiskers’ ends depict the minimum and maximum.

The five numbers represented by the boxplot: 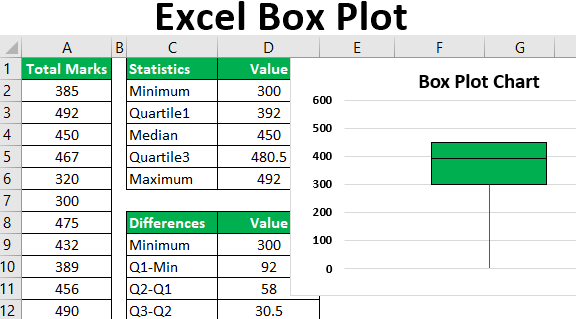 How to Make Box Plot in Excel? (with an Example)

Let’s say we have a dataset of a class that contains total marks of its students in all subjects (out of 500, max marks: 100 for each subject), and we wish to create a box plot in excel for the same.

We have the following students’ marks data in an excel sheet:

Now the following steps can be used to create a box plot for the above data (basically in excel 2013):

It is very simple to create a box plot with Excel 2016 as it has a ‘Box and Whisker’ chart under the statistical charts in the charts section by default. However, Excel 2013 does not have a chart template for the box plot by default; thus, we have to create it by following the below steps:

Calculate the five statistics from the dataset that are required for box plot: Minimum, Three Quartiles, & Maximum, by using the following functions: 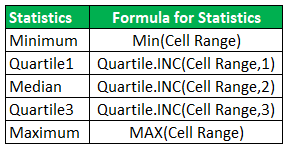 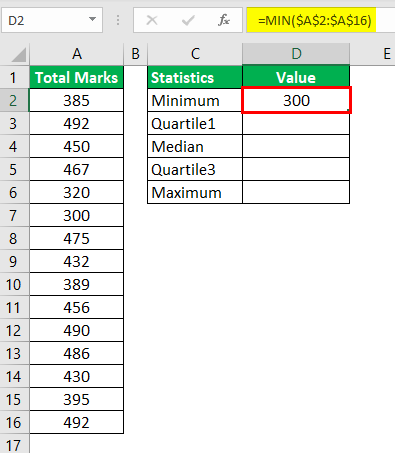 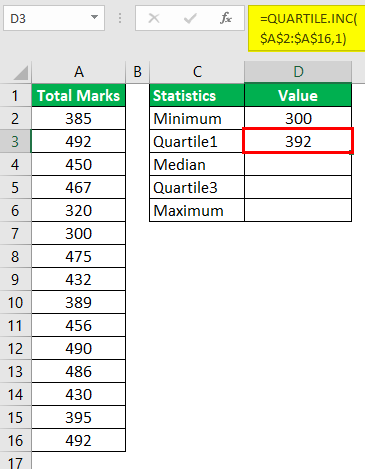 Calculation of five statistics for the box plot will be – 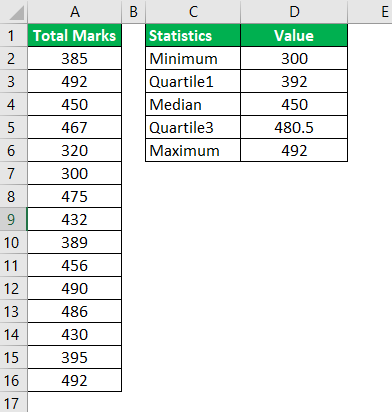 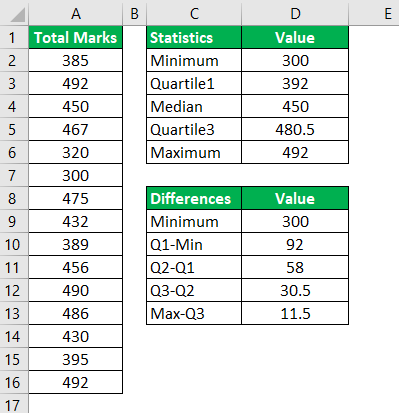 Now we will create a stacked column chart with this final table and turn it into a box plot.

So let us first create a stacked column chart in excel:

Select Differences and Value then click on ‘Insert’ -> All Charts -> Stacked Column Charts:

On doing this, we get a stacked chart as below: 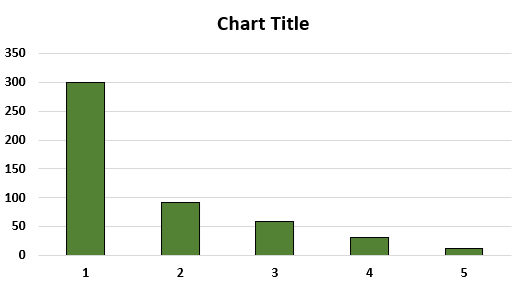 We can see that this is not similar to a box plot because, with this stacked chart, excel draws stacked columns from horizontal by default and not from a vertical dataset. So we will have to reverse the chart axes.

To do this, right-click on the chart, and click on ‘Select Data.’ 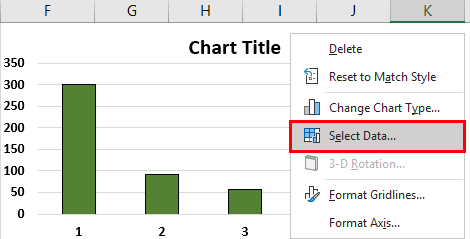 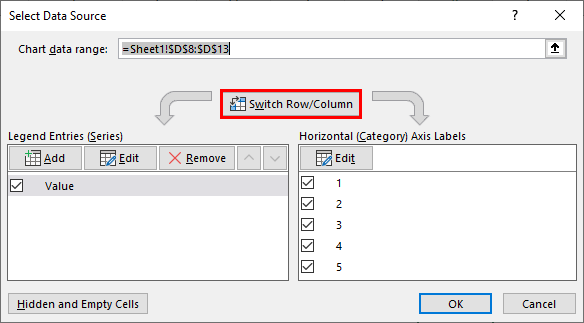 We get stacked chart as below: 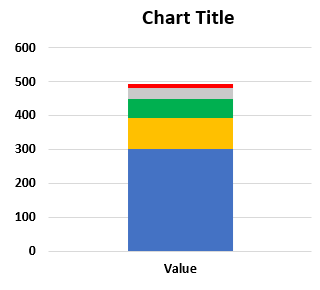 We will now convert this stacked chart type to box plot as follows:

Select the bottom part of the column (blue area), and click on ‘Format Data Series.’ 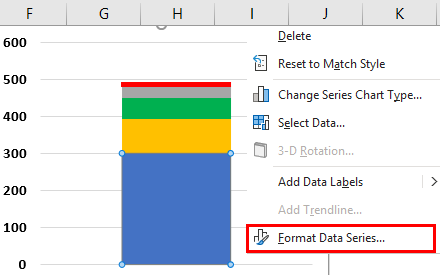 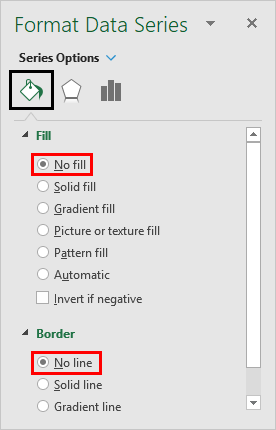 We get the following box plot chart as below: 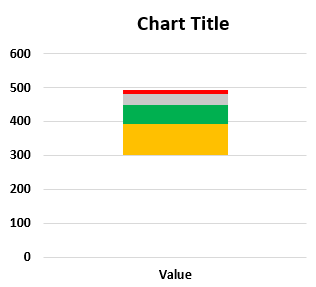 The next step is to create whiskers by replacing the topmost and second from bottom segments i.e., red and orange regions (as we have deleted the bottom-most) with lines/whiskers.

To draw the top whisker, we select the topmost region/segment (red) and expand the ‘Fill’ tab. 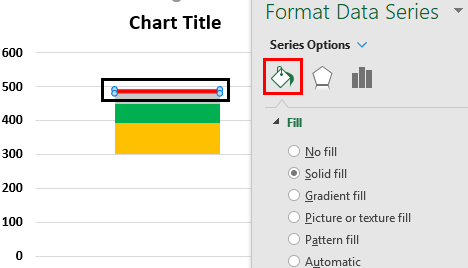 And select the ‘No Fill’ button. 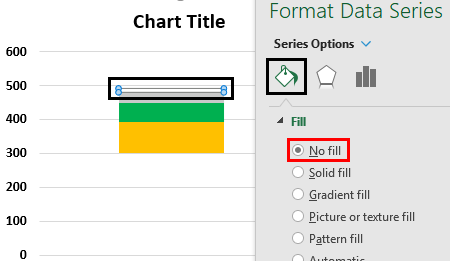 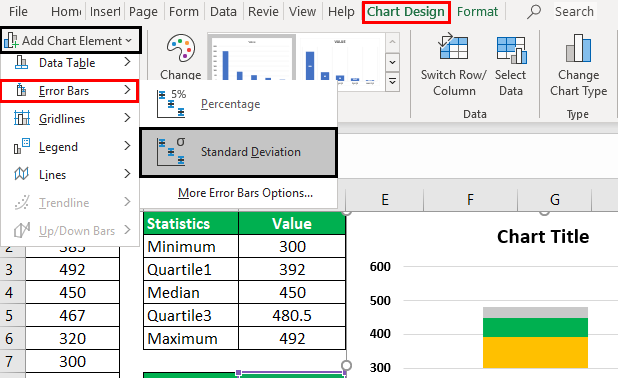 Now we click on the Plus button at the top right of the chart, and select and expand ‘Error Bars in excel’ and then select ‘More Options.’

This will open the ‘Format Error Bars’ panel and set the following:

Set: Direction to ‘Plus’

So we will now have a top whisker drawn as below: 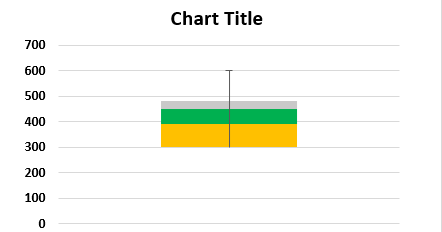 Similarly, to draw the lower whisker, we select the second from the bottom region (orange, which is now visible as last) and repeat the same steps as above. The only change would be that the ‘direction’ in error bars’ will be set to ‘minus.’ 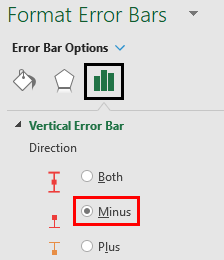 So we will now have a lower whisker drawn as below:

So we can see in the above screenshot that the stacked column chart is now resembling a box plot. Box plots are generally of the same color throughout, so we can use a one fill color for it with a slight border.

Now let us see how a box plot is interpreted or viewed:

We can see in the above screenshot that:

So the box plot for the given dataset is correctly drawn with the five statistics (minimum, three quartiles, and maximum) calculated as above.

This has been a guide to Box Plot in Excel. Here we discuss how to create (make) a box plot in excel along with step by step examples and a downloadable excel template. You may learn more about excel from the following articles –