What is EV to EBIT Ratio?

EV to EBIT is a one of the important valuation tools and is calculated as the ratio between enterprise value, which encompasses the total company’s value instead of just the market capitalization and earnings before income taxes, which gives information about how much business a company has successfully done over a certain period. 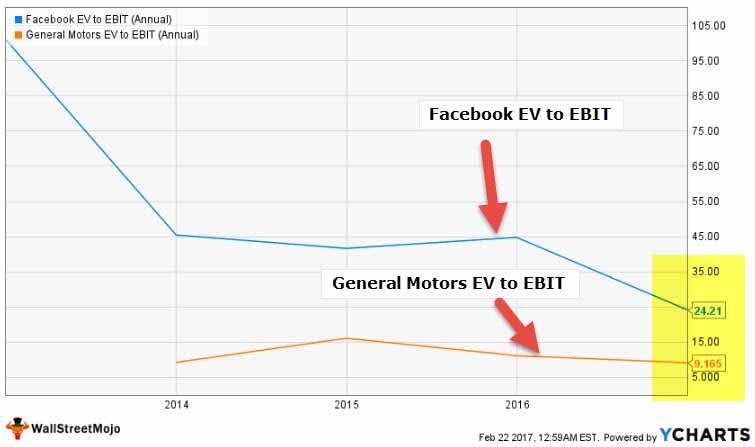 What is Enterprise Value?

Enterprise Value is the total value of the firm. Enterprise value depicts the value to the overall stakeholders, including the debt holders, shareholders, minority shareholders as well as preference shareholders.

The formula for Enterprise value is as follows.

Enterprise value can be considered as the total consideration at which the company can be bought by the investor. This implies that the buyer will also assume the debt of the company, which he will have to pay off.

The above Operating Profit of Colgate is EBIT. EBIT is defined as any company’s profit, including all expenditures just leaving income tax and interest expenditures. However, EBITDA measure is good to be used for analyzing and comparing profitability between firms and businesses as it removes the impacts of accounting and financing decisions.

Please have a look at this guide for detailed differences between EBIT vs. EBITDA Guide.

EV to EBIT Formula and Interpretation

EV/EBIT multiple gives the answer to the query “What is the company’s valuation worth per Operating Profit dollar”.

Number of outstanding shares (as of last reported 10K) = 477 million

Amazon’s has a very small amount of debt in its balance sheet.

EV to EBIT – Forward vs Trailing

This multiple can be further subdivided into Investment Banking Analysis.

Likewise, the Forward Multiple = Enterprise Value / EBIT over the next 12 months.

The key difference here is the EBIT (denominator). We use the historical EBIT in trailing multiple and use forward or EBIT forecast in the forward multiple.

Let us look at the example below to understand how they are used.

You are provided with Current Price, Enterprise value, EBIT, and EV to EBIT forecasts of all six companies. You need to find the following –

Which company should you invest in?

The answer to this question lies in the knowledge of trailing and forward multiple.

Take a look at the table above, you will note that EV to EBIT is lowest for company B in 2016A at 26.7x, while it is highest for Company D at 80.0x. This makes us believe that Company B is the cheapest. However, this is an incorrect conclusion! You should never value a firm on the basis of what has already happened in the past. Instead, you should give more weight to the future of the company, and therefore forward EV/EBIT becomes critical. If you take forward EV to EBIT of Company B, you will note that it has increased dramatically to 40.0x in 2018. On the other hand, the lowest forward multiple is that of Company D. This is the one you should look at from the investment point of view.

Which company is the worst from the valuation point of view?

Can I use EV to EBIT in the Services Sector?

Services companies do not have a large asset base; their business model is dependent on Human Capital (employees). Due to this depreciation and amortization in Servies Companies in generally non-meaningful.

Since the difference between EBIT and EBITDA is not much, you can easily use EV/EBIT or EV/EBITDA for Software companies valuations.

Other services sector where you can apply EV to EBIT are –

Can I use EV to EBIT in the Oil & Gas Sector?

Oil & Gas companies are Capital Intensive companies that invest heavily in plants and manufacturing setup and are dependent on continuous investments in assets to manufacture finished products. Therefore, with a higher asset base, its depreciation and amortization are relatively higher.

Now let us compare the above graph with that Exxon. Exxon is an Oil & Gas company (highly capital intensive firm). As expected, we note that the difference between EBIT Margin and EBITDA margin is very high – approximately 8.42% (13.00% – 4.58%). This is because of heavy investments in Plant Property and Equipment that leads to high depreciation and amortization figures.

The EV-to-EBIT multiple has a unique benefit of valuing a firm despite its capital arrangement that makes the ratio so attractive among the analysts.